Following the announcement of The Tour de France route for 2015, what do we think of the route and what does it mean for those following it in a motorhome? 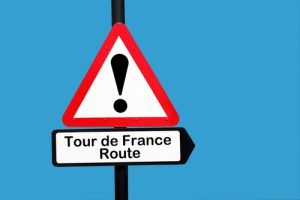 We think it is a fabulous route and it appears to have been designed with the France Motorhome Hire depot location in mind, putting us right in the middle.  We are located equidistant between the northern and southernmost points of the route (how kind of the organisers to plan a route for that suits our clients!).

Described by the pundits as “Sparkling”, “Packed with challenges” and “Full of brutal climbs”, we think the 2015 route is incredibly exciting and also (for the first time in a few years),  nice and easy to follow in a motorhome or campervan.

Gusty Dutch winds and cobbled roads are likely to whittle down the list of strong contenders early on and relentless, brutal climbs will favour the climbers who are still standing later on.  The penultimate stage, finishing at l’Alpe d’Huez, will mark the end of a gruelling battle between the top climbers, most of whom are already claiming the route is made for them.

The 2015 Tour is one of the most spectator-friendly we have seen for a long time and following it in a motorhome or campervan from start to finish will be more do-able than in previous years.