A three-day cycling tour along the Atlantic Coast of France that takes you back to your motorhome base each day!

Cycling in Leon along La Vélodyssée

We often write and wax lyrical about all the cycling opportunities in France, and for very good reason: there are hundreds of fantastic kilometres to explore here, as recognised by the inaugural EuroVelo Cycle Tourism Awards, which earlier this year voted France ‘The Most Popular Cycle Tourism Country in Europe’!

With so many choices! How do I work out where to go?

We’ve recently discovered a brilliant source of inspiration for cycling in France called La Vélodyssée. It’s France’s longest cycle route at 1,200 kilometres, running down the Atlantic coast linking Roscoff in Brittany with Hendaye on the border with Spain.

The great thing about La Vélodyssée is that it is broken down into 14 sections. Within those 14 areas along the coast you can pick out routes according to ability (it’s mostly pretty easy terrain suitable for leisure cyclists and families) and interest. 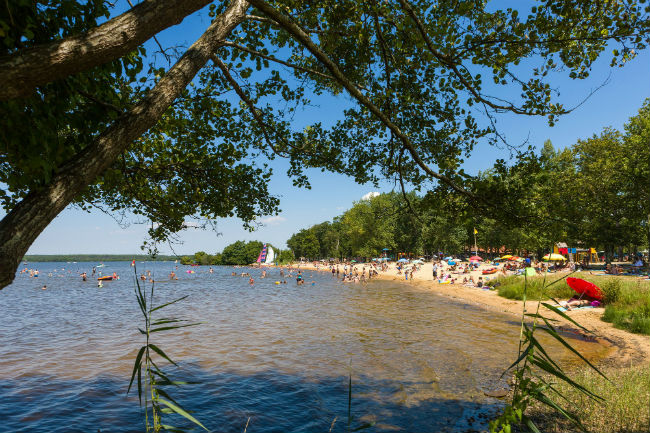 Successful cycling out and back

So many cycle routes start at ‘A’ and end at ‘B’, which leaves you miles from your motorhome base with no easy way to return – not great for a relaxing holiday! So, it’s great to find that La Vélodyssée has routes that start at point A – i.e. where you will have parked your motorhome – and return to it! We like the look of a three-day cycle tour starting from Léon in the Landes region. You’ll start with a gentle 10km on the first day, exploring Léon and the coast, followed by 27.6km on day two along the banks of the Léon Lake and the Courant d’Huchet nature reserve.

On the last day head 27km towards Saint-Girons-Plage and then Vielle-Saint-Girons Lake where you can do some stand-up paddling in the freshwater lake. Each day you’ll return to your campervan base at Léon where there are campsites, such as Campsite Lou Puntaou.

Get more details about the 3-day tour at La Vélodyssée: ‘A romantic break amidst sea and forest’.

Hire a bike or bring your own wheels?

All France Motorhome Hire vehicles are fitted with bike racks included in the hire price, so it’s easy to take bikes along with you. We offer bike hire too or you can bring your own bikes. Find out more about bike hire and transporting bikes here.