Recent campervan hire clients, Anne and Jerry from the USA, sent us their brilliant diary of their 7-day “camping” trip through Burgundy, which we feel everyone will enjoy and learn from! Over to you Anne & Jerry: 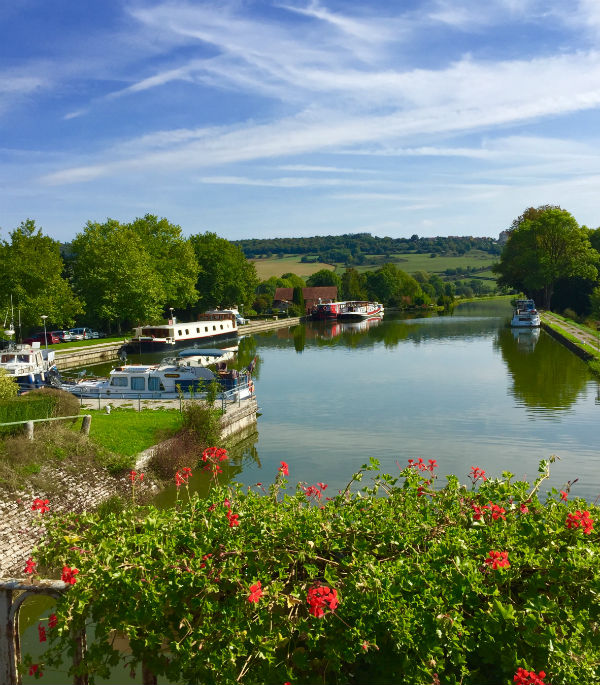 We’ve camped a lot in the States, so camping [in a campervan] in France sounded like a fun trip, accommodation and transportation all in one. It was easy to set up except for the excess insurance coverage. No companies would cover Americans*. Had to search a while before I found one (www.icarhireinsurance.com/). Now we’re covered for a year.

FMH is different in that you can pick up on Saturday afternoon, which fits nicely into a red-eye flight from America. 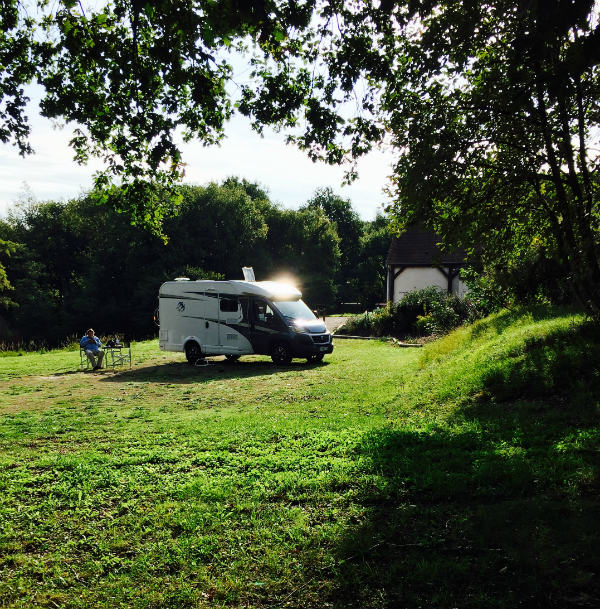 So, Saturday: Charles de Gaule airport to Gare de Lyon, leisurely lunch, hop on the train to Sens. One thing even Rick Steves doesn’t tell you is, you’re not supposed to just board French trains with your ticket like we do. You have to stamp them first in a yellow machine marked “composte“. Our train conductor could have fined us €35 each, but he let us off as clueless tourists. The train was only €10 each. 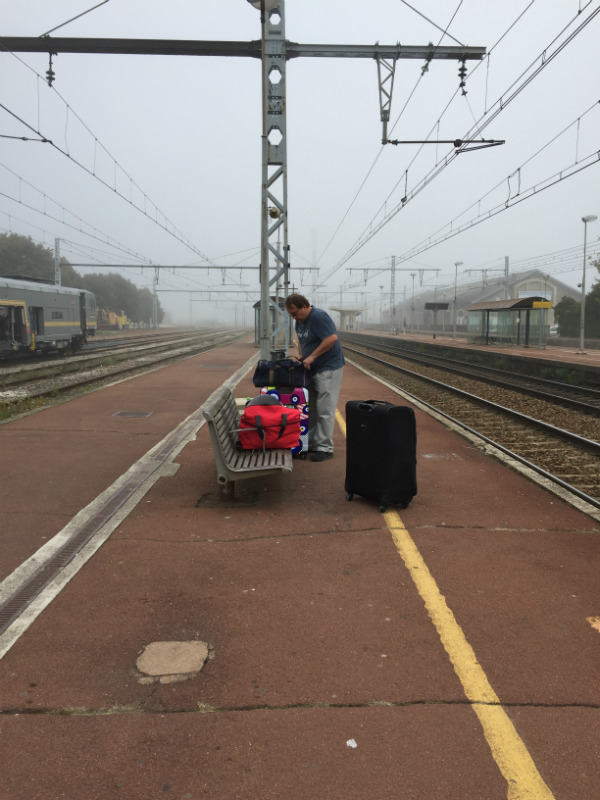 Picked up in Sens by Alice from FMH and taken to the depot at Véron, and we saw how easy it is to drive a standard with the shift on the dashboard and how good the French roads are. Got our camper and we were off.

Right around the corner in Véron is a small grocery shop and also a boulangerie, so we were stocked up. We didn’t want to go too far that night, after fitful sleep on an overnight flight, so went up river to Paroy-sur-Tholon and our first France Passion stop. The Vignot family spoke as much English as we do French, but we bought some of their wine and they even made us a reservation at Le Rive Gauche restaurant in Joigny. 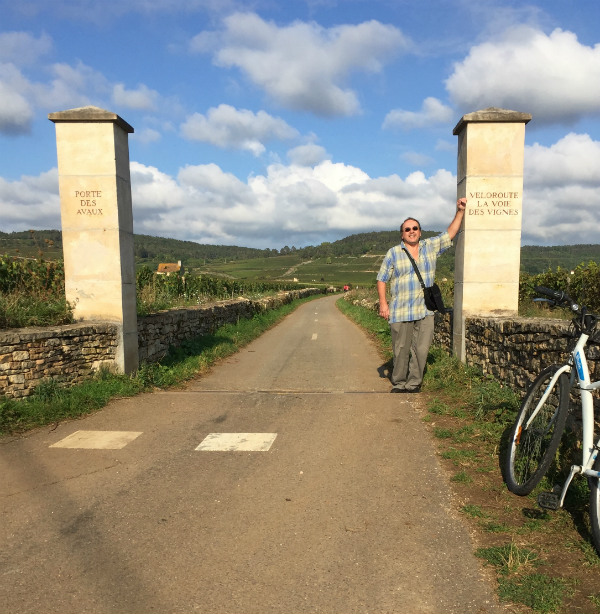 A bike trail entrance through the vines in Burgundy, France

Sunday: After strolling around Paroy (discovered French communal water pumps) we went on to Auxerre to see the clock tower and Joan of Arc’s cathedral.  Then further up river to Les Grottes D’Arcy sur Cure, deep limestone and clay caves with 40,000-year-old paintings of mammoths. This is an old country. Stayed that night at a private campground that was mostly empty, just south of Semur-en-Auxois, at Pont du Lac. The campground restaurant puts American counterparts to shame. This is camping? No one speaks English but it’s no problem, we ate very well. Using google translate to read menus is hilarious. 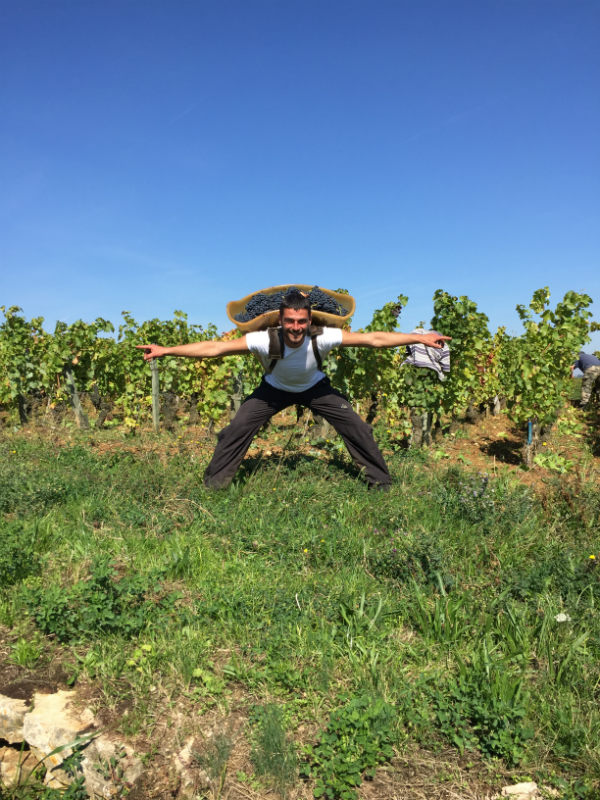 Monday: And we’re shortly over the cow covered hills and into the valley of grand crus in Cote d’Or. Vines everywhere but only about waist high and closely spaced. Hand harvesting only. This is why we came. Met friendly pickers and anxious vintners waiting for grapes from the vineyard. Every tiny village has several wineries. Camped that night in the middle of Nuits St. George at an aire de service. Tip: park early, the aires fill up fast. Rode our bikes around town and vines and had another tasty meal at L’Etoile in the town center, with a 2002 Nuits St. George. Seemed appropriate. Road back to aire along canal tow path in the dark. Won’t forget that bit. 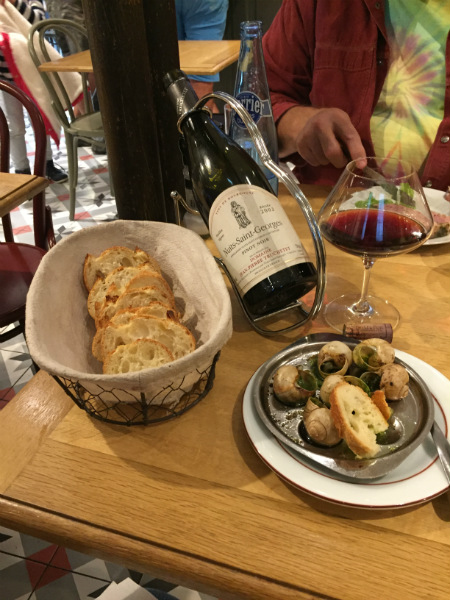 Tuesday & Wednesday: It was a really short 13 km hop to Beaune and its municipal campground, an easy mile from the centreville. Here we stayed two nights and walked around shopping, seeing museums, eating, wine touring. The bike paths through the vineyards to Pommard are great. Everywhere is permeated with the aromas of grapes and winemaking. This campground has an excellent restaurant too and we met people from all over Europe.

Thursday: We went back north to Vosne-Romanee and more wine touring and eating. Americans should note that lunch is strictly 12-2pm, then they close. No restaurant opens for dinner before 7pm. Two-hour lunches are normal as are four-hour dinners. Don’t know how they get anything done. Came across a church thrift store and picked up some chic Paris fashion, cheap.  Stayed that night at a France Passion truffle farm up in the hills. Quiet, with endless stars. 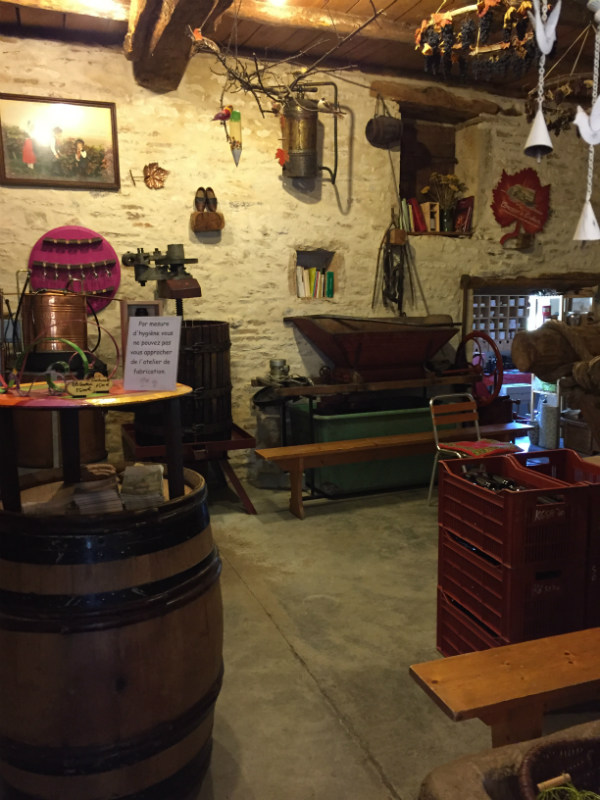 Inside the brocante shop

Friday: outside to stretch my legs among the cassis bushes, and along comes a food truck, like an ice cream truck, only it sells croissants! So that’s breakfast, camping in the middle of nowhere, France.

Have to start heading back towards Véron, but along the way stopped to see canal boats negotiate a lock, and we helped to operate the lock. Passengers were from Minnesota and seemed a little bored at the slow pace. They should’ve rented a camper! 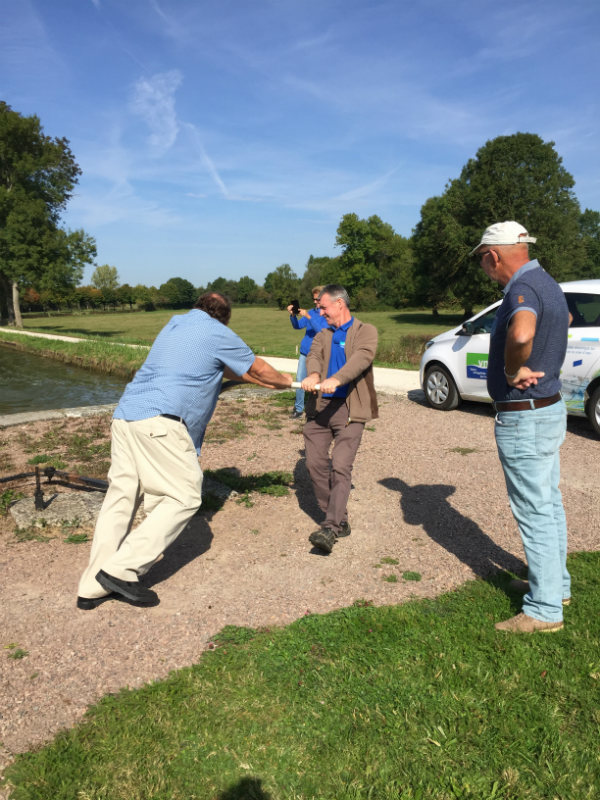 A canal trip is fun but not as exciting as a camper trip!

From the lock we spied a fairy tale castle on a hill that was Chateauneuf. So, drove up there and walked around, but the castle was closed for lunch (12-2, remember!) and didn’t want to wait so took in the views and moved on, actually taking the A6 highway for once, to save time. Got off after Auxerre and discovered a French flea market, or brocante, and got some more cool old stuff. 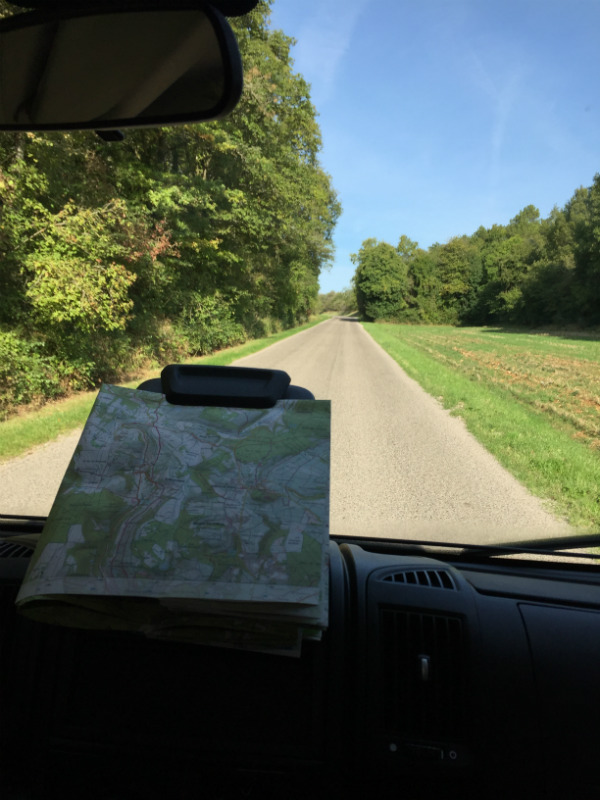 Following the route through beautiful Burgundy

Set down for the last night in St. Julien sur Sault at the riverside campground. Hungry by then, but no restaurant open since it’s only 5 and campground for once, didn’t have one. In town, found the St. Julien Hotel whose kind bartender/chef whipped us up duck burgers with crispy pan seared foie gras – I swear I would return to France just for that! (Oh, and frites, everything comes with frites in France, even croissants.) The regulars in the hotel’s bar/restaurant were friendly, but a little freaked out that anyone would eat dinner at 5pm.

A short hop back to Véron to drop off the camper, pack all our wine in our bags, and an enjoyable ride back to the train in Sens and back to Paris for another leisurely lunch before heading out to CDG. Lots of protests that day, or “manifestations” as the French say, but we made it out of town easily. French cabbies know their trade! Luckily, nobody was on strike the whole time we were there. You never know in France. 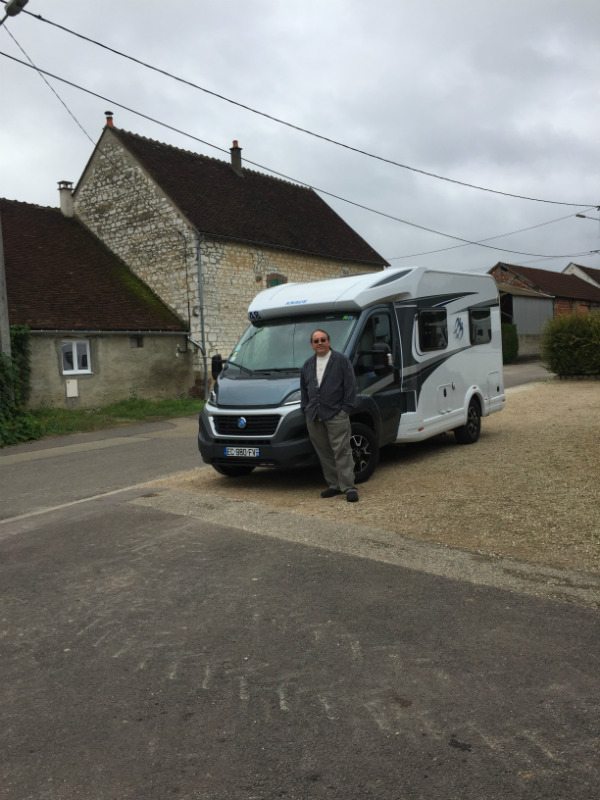 Our home on wheels for 7 days in Burgundy

So that’s the story, if you camp in France, you won’t do better than FMH for new, comfy campervans, and their service is top notch, and, oh yeah, in English. But you knew that. Anyway, hope you have as much fun as we did.

Anne and Jerry from the USA

*France Motorhome Hire Editor’s note: The underwriter who works with many of the insurance agents that offer “Excess Reduction Insurance” to worldwide clients withdrew cover for US clients (and some other nationalities) in 2017 without notice or explanation. The agents we recommend to our clients have found new underwriters and are currently updating their policy documents so they can once again offer this cover. They assure us it will be available again to worldwide clients so there will soon be a wider choice of insurers offering this type of cover for those traveling from outside the EU.